For my husband, every Christmas is the worst Christmas ever. His father died on his way home for the holiday after a business trip to Chicago.

I previously wrote about this horrendous midair accident on the 50th anniversary of the Park Slope crash. I thought it would be fitting to re-post it today,  Day 25 of 30 Days of Writing. The Writing Prompt: The Worst Xmas Ever. 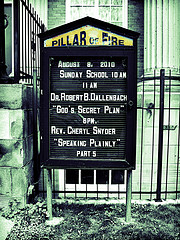 From the Green-Wood Historical Fund:

Ten brownstones near the intersection of Seventh Avenue and Sterling Place were set on fire, as were a funeral home, a laundry, a delicatessen, and, strangely enough, the Pillar of Fire Church.

134 people died that day, including my husband’s father. Jim was four years old at the time.

But the tragedy didn’t end with the victims suffering or with the families devastating losses. On that day a Channel 4 news reporter, Gabe Pressman, had gotten a hold of the passenger manifest from United Flight 826 and called my husband’s mother, and likely other families, in order to get an interview.

He called my mother-in-law live on the air to inform her that her husband was on United Flight 826 and said something to the affect of, “Do you have a comment?”

That’s how my mother-in-law found out her husband had died. Her brother grabbed the phone from her and said, “Fuck you Gabe Pressman,” then hung up.

When recounting the incident of his father’s death on the 50th anniversary of the air disaster, Jim said of Gabe Pressman, “How callous and cold hearted.  Just to get a story.”

NY Times television critic Jack Gould had criticized the television coverage of the crash and had published a piece called . . .

“Exploiting Sorrow,” specifically, “the disgraceful and tasteless attempts to interview grief-stricken people who lost members of their families in the tragedies.”

Fifty years later while reflecting on Jack Gould’s criticism of his handling of the story, Gabe Pressman had this to say:

And I say to you, Mr. Pressman, you don’t know beans about integrity in journalism or respect for victims’ families. A line needs to be drawn between “getting the story” and respecting the privacy of those who survived an untimely death of a loved one. This was “gotcha journalism” at its worst.

In spite of the soul gouging by journalists that transpired that day, today, Thursday, December 16, 2010, fifty years later, we remember the souls aboard the two doomed aircrafts, as well as the victims killed on the ground.

On the 50th anniversary of the air disaster that set a section of Brooklyn ablaze, the Green-Wood Historical Fund in Park Slope is dedicating a memorial to those who died on that cold December morning.  Back in August, while responding to an inquiry about a grave in a public lot, cemetery archivist Theresa LaBianca accidentally discovered the story of the 1960 tragedy.

On December 16, 1960, United Airlines Flight 826 and Trans World Airlines Flight 266 collided over Staten Island. The United flight then tried to make it to LaGuardia Airport for an emergency landing, but crashed in Park Slope. Ten brownstones near the intersection of Seventh Avenue and Sterling Place were set on fire, as were a funeral home, a laundry, a delicatessen, and, strangely enough, the Pillar of Fire Church. Eighty-four people on that flight died, and six people on the ground also were killed. The TWA flight crashed in Staten Island and forty-four passengers and crew died there. The investigation of this disaster marked the first time that an airplane’s black box data recorder was used to provide details of what had happened.

In an era before DNA identifications were possible, three caskets of “Fragmentary Human Remains” were filled from the Park Slope crash site and were buried in a grave in lot 38325 that was purchased by United Airlines. No marker was placed on the grave.

An eerie side note: Twenty years ago I worked for a real estate advertising company in Harrison, NY. While having a discussion about family with my boss, I mentioned the 1960 air disaster and my connection to it.

My boss then told me that he had been a student at the time at a mid west college and was booked on the same doomed flight out of Chicago O’Hare airport. He missed the flight. Jim’s father caught an earlier flight to get home to his family for Christmas. I often wonder if Jim’s dad had taken the seat that my boss had never occupied.

To read more about the air disaster and the subsequent cover up by the FAA, read the book Sterling Place by Ray Garcia.  I haven’t read it yet. My husband did. He had heard about the book before its publication and had contacted the author, concerned with the tenor of the content. My husband was pleased with the author’s response.

Disclosure: The photo is not of the Pillar of Fire Church. I couldn’t find a picture via Zemanta.

23 Comments → The Worst Xmas Ever: Fallout from a Plane Crash