posted in Review, Satire on December 5, 2011 by Lauren

When asked to review Peg Tittle’s eBook, “Shit that Pisses Me Off,” a collection of 25 previously published essays with attitude, I couldn’t say no. I had found a pissed off kindred spirit who writes radioactive prose with a hint of sardonic wit. Also, her name is cool. 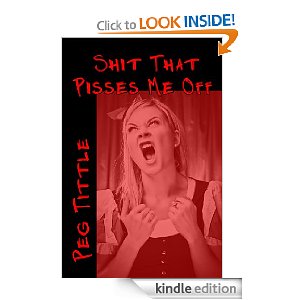 Peg sets her sights on a subject with laser sharp accuracy then hurls words like missiles in her collection of 25 cogent essays on the foibles and hypocrisies of life.

In the first essay, “You Oughtta Need a License for that,” Peg deconstructs the disingenuous argument on the sanctity of life.

“We wouldn’t accept such wanton creation of life if it happened in the lab. Why do we condone it when it happens in bedrooms and backseats? . . . It should be illegal to create a John Doe Junior to carry on the family name/business.”

And on the question of the right to reproduce,

“Oh but we can’t interfere with people’s right to reproduce! . . . Merely having a capability doesn’t entail the right to exercise that capability.”

In “Mr. and Mrs.,” a rant on society’s branding of the sexes, Peg lashes out at the subliminal herding of men and women.

In the controversial essay, “In Commemoration of the Holocaust,” Peg dissects the duplicity of religion and mocks the sheep mentality of the flock.

“I’m not saying it didn’t happen. I’m not saying that, in any way, it was okay. But I’d like to point out that a devout Jew would’ve done, would do, the same thing to the Germans—if God told him to. ‘Oh but God would never command such a thing.’  Take a better look at your Bible . . .”

— A piece that caused me some angst because of my Jewish background. I understand Peg’s commentary on the hypocrisy of religion. But I was uncomfortable with her use of the Holocaust to formulate her argument. Perhaps, several examples would have been more “fair and balanced,” to quote Fox news.

Nothing fair and balanced about that echo chamber, IMO. Now that I’ve stepped on that landmine, I won’t be receiving triage from my right leaning friends.

Whether you agree or disagree with Peg’s position on the issues, “Shit that Pisses Me Off” will stick to your brain long after you’ve ingested every word — No thought evacuations here. Her writing is adept and titillating – her name is Tittle after all – her razor sharp words will slice and dice the cerebral jugular.

If you enjoy reading smart, witty essays that challenge the intellect, download a copy of “Shit that Pisses Me Off” for $2.99 at Amazon and get pissed off, too.

To learn more about Peg Tittle and her writing please swing by her website Bite-Sized Subversions – challenging thoughts about everyday things.

I am thrilled to feature a chapter from “Shit that Pisses Me Off” on Think Spin in the coming days.

Other books by Peg Tittle:

Critical Thinking: An Appeal to Reason

What If…Collected Thought Experiments in Philosophy

Full disclosure: I received a free copy of “Shit that Pisses Me off” for writing the review.

17 Comments → eBook Review: Shit that Pisses Me Off