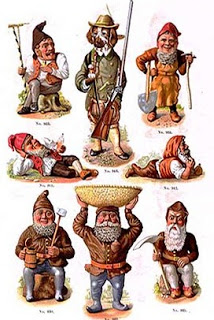 I first learned about the problem of migrating lawn gnomes from Reforming Geek, who mentioned it in her recent post Of Winds and Wings and Bluebonnets! Thank you, RF, for your tireless, selfless efforts to warn gardening junkies like me of the hazards that lurk in our gardens.

You’ve seen them crouching in the grass with sly grins on their sinister ceramic faces. Seemingly motionless, they lurk quietly waiting for unsuspecting victims to trip over their pointy little heads and take a header in the grass or worse step on their ceramic gnome droppings.

They’re everywhere. On your neighbor’s lawns, patios, and front steps or hiding beneath the hedges. Despite their grotesque appearance, danger they pose to lawn enthusiasts, and ability to multiply faster than Kate Gosselin, lawn gnomes continue to flourish in suburban and country areas because the hazards of lawn gnome ownership remains a silent problem.

Yes, we citizens and neighbors have not spoken publicly about the lawn gnome threat, tolerating their presence in much the same way we tolerate our neighbor’s kids running amok in our gardens, trampling our begonias and smushing our tomato plants before the deer have had a chance to feast upon them.

Lawn Gnome historians distributors have traced their American roots scraps back to 1892 when these ceramic creatures sailed the Mayflower and landed on Plymouth Rock, after first being introduced into Britain in 1847 by Sir Charles Isham, some chap I never heard of.

Before arriving in Britain, earlier in the century, lawn gnomes enjoyed years of decorative domicile decadence in France as well as Germany, where the first known gnomes were discovered in a small town called Gräfenroda {Gra-#@!%}. Other historians’ have traced the gnomes to Poland where they once frolicked in meadows and drank from fountains filled with Poland Springs, until they were trapped and sold as lawn pets to French and British consumers.

In 1997, the plight of the lawn gnome spurred the creation of a French civilian brigade known as the Garden Gnome Liberationists Front (GGLF), an angry group of ceramic do-gooders who banded together and stole the gnomes from neighboring lawns then released them into the wild. Years later, a GGLF splinter group in Barga, Italy, established the first European Gnome Sanctuary.

From The Barga News:

“For a number of months gnomes have been moving into a small valley in the Province of Lucca in Tuscany, Italy. … Most have decided to settle in the town of BARGA, where they have found a sympathetic population known as BARGHIGIANI who are not only prepared to tolerate the gnome way of life but are even prepared to protect it! … We are proud to announce the first European Gnome Sanctuary here in Barga. … Life here is protected, no more small garden prisons, no more torture (the strimmer [i.e., motorized weedeater] is a thing of the past here in Barga).”[16]

Despite their illustrious notorious history, the underlying threat of lawn gnomes cannot be ignored. I, for one, can no longer tolerate wasting time waiting for hundreds of lawn gnomes and their gnomelings, to waddle across a road, one behind the other, in a long, never-ending line that stretches on for miles, days, and sometimes weeks. I am sick and tired of scraping gnome droppings from the bottom of my shoes and tripping over their pointy little heads hidden in the grass.

That’s why I’m a proud sponsor of the non-existent gnome remover, www.awaywithgnomes.com, another fine product from the folks at www.awaywithgeese.com, which is real, like a gnome, however the gnome product is not.

For lawn gnome disposal, place it in a plastic trash bag, twist tie it shut, before inserting into a garbage can, then cover. Shattering a gnome in a controlled detonated blast in an abandoned airfield is also suggested but not encouraged, or crushing it in a compactor until it silently squeals.

Disclaimer: This site does not endorse the destruction, deriding, or defamation of lawn gnomes. Nor does it support lawn pet gnome rescues or subsequent releases into the wild, although it is a proponent of lawn gnome birth control solutions and products.

Are lawn gnomes a problem in your neck of the woods or chin of the yards?