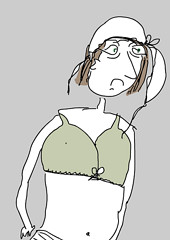 Holmes:    Pacing. Well, Watson, it seems that the six bras were last seen hanging from the rack in the laundry room, where Dame Worthington still searches for her undergarments.

Holmes:   Bosom braces, Watson. Those confounded female contraptions with padlock clasps in the back.

Holmes:    You could say that, Watson, or Tit Slings, Booby Baskets, Der Floppem Schtoppems. Whatever you call them, Dame Worthington’s bras are quite unique.

Holmes:    They lift and separate in addition to holding the front line firm against invading enemy forces.

Holmes:    Yes, Watson, an enemy so diabolical, so horrible, I get sick every time I utter the word – Gravity!  He wipes his brow.

Holmes:    I’m afraid so, my dear Watson. In fact, I believe that Gravity is the prime suspect here. Poor Dame Worthington has been castlebound since the bras went missing. Gravity is preventing her from leaving her home.

Holmes:    Well, when unbridled, breasts can become highly dangerous weapons that can take out an eye or render an unsuspecting passerby unconscious. Watson, I’m afraid we have a code DD catastrophe on our hands of incredible proportions. You see, this was not the first bra complaint to hit the wires. It appears that Gravity is attempting to keep middle-aged women everywhere from leaving their homes.

Watson:    Not their homes, Holmes?

Holmes:    Yes, indeed. We have to help these women, prevent them from becoming objects of public ridicule, from being called names, like Dangling Participle Lil, Flopsy Wopsy, Swing Low Flo.

Watson:    We’ve got to make a quick bust, sir. The cougars won’t stay locked in forever. They need to prowl the college bars and fraternity houses; otherwise, I dare say what will happen next.

Holmes:    Yes, Watson. We must find the bras before Gravity does the unthinkable.

Foot in the mouth note: I wrote this after several of my bras went missing. As of this moment, I have still not been able to locate them.

8 Comments → Sherlock Holmes: The Bra Burglary or Lifted off the Rack.